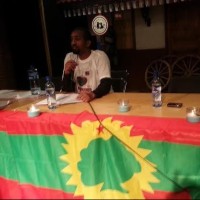 A country is not about its leaders but of its people. It goes without saying that the people are the symbolic mirror of their nation. That is exactly why foreigners particularly the development partners assess and evaluate a nation through its people. In other words, happy people are citizen of not only a peaceful and happy nation but one which accepts the principles of democracy, rule of law and human and people’s right. On the contrast, heartbroken, timid and unhappy people are subjects of dictatorial, callous and brutal regimes. Such people are robbed of their humanity and identity through systematic harassment, intimidation, unlawful detention, extra judicial killing and disappearance by the leaders who transformed themselves into creators of human life or lords. The largest Oromo nation in Ethiopia through the 22 years of TPLF/EPRDF repressive leadership has turned into a nation sobbing in the dark. One does not need to be a rocket scientist to figure this out. All it takes is a closer look at any Oromo in the face. The story is the same on all the faces: fear, uncertainty, and an unquenchable thirst for freedom. The disturbing melody of the sobs, in the dark echo the rhythmic, desire to break free from TPLF dictatorial shackles.

The Horn African region of Ethiopia is home to just 90 million people, it is also home to one of the world’s most ruthless, and eccentric, tyrannical regime. TPLF/EPRDF is ruling the nation particularly the Oromo with an iron fist for the past two decades and yet moving on. Today dissents in Oromia are frequently harassed, arrested, tortured, murdered and put through sham trials, while the people are kept in a constant state of terror through tight media control, as repeatedly reported by several human rights groups. It has been long time since the Woyane government bans most foreign journalists and human rights organizations and NGOs from operating in the country for the aim of hiding its brutal governance from the world. While the people in Ethiopia are being in terrorized by TPLF gangs, the western powers are yet looking at the country as a very strategic place to fight the so called terrorism in horn African region. But In today’s Ethiopia; as an Oromo, No one can speak out against the dictatorship in that country. You can be killed. You can be arrested. You can be kept in prison for a long time. Or you can disappear in thin air. Nobody will help. Intimidations, looting Oromo resources and evicting Oromo from their farm lands have become the order of the day everywhere across Oromia.

No Oromo has constitutional or legal protection from the killing machinery of the TPLF securities. The recent murdering of Tesfahun Chemeda in kallitti prison is a case book of the current circumstance.