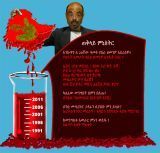 By: Dejene A. Janna
(January, 2018; Bonn, Germany)
The study of federalism has attracted scholars of various fields for a long time. Federalism as an instrument of balancing the tension between universalism and particularsim has drawn more attention in pluralistic societies. After the end of the cold war era, there is a drift to reaffirmation of ethnic identity as a means of determining the public life of a society, the venture to ethnify federalism might be
regarded as a pragmatic solution, but still prone to critique.
Ethnic-federalism based on an article published by Asress Mulugeta (2017), is a governing system that had been implemented and tested in a number of countries of the world. But it has lead all of them to violent disintegration. The real reason for the failure of ethnic federalism in those countries was not economic or lack of democracy. It was simply because of the politicization and manipulation of ethnic relations by the
ruling regimes, the regional ethnic elites and/or external forces. This shows how ethnic-federalism is destined to fail. Lack of democracy, unfair share of power and resources among ethnic groups are the other main factors that fuel ethnicization (uncountable), ethnic conflicts and eventual disintegration of a country.
Counting 27 years back in Ethiopia, and since its implementation in 1990s, the EthiopiaƯs ethnic federalism system has never brought any positive aspect to EthiopianƯs people peaceful coexistence rather it has been a cause of more dangerous ethnic tensions and conflicts. For the last two and half decades, many Ethiopian scholars has been constantly giving a strong warning that the ethnic tensions and conflicts in Ethiopia could easily spiral out of control and might slide into a Rwanda type genocide if the ruling minority TPLF, keeps sowing ethnic animosity between
different ethnic groups of the country. Ethiopia is a federal state and it is often debated that the TPLF lead EPRDF took its
ideas of ethnic federalism from StalinƯs theory of nationalities and sought to implement them in Ethiopia. But at the down of EthiopiaƯs federalism, it was being renounced in Eastern Europe. Furthermore, according to Professor Dr. Merera Gudina
in Ethiopia, the deferral experiment of politics has two objectives:
1. To create a country of equal nations, nationalities and people.
2. To put an end to authoritarian rule by democratizing the Ethiopian state and
society as a whole, this being a precondition for durable peace and development.
The track record of the minority TPLF lead government in the last couple of decades shows that with an absolute control of the security and the military forces, TPLF has been directly or indirectly inciting ethnic conflicts and carrying out killings in the Amhara, Oromo, Gambela, Ogaden and other regions of the country.
TPLF has been single-handedly ruling the country for over quarter a century. The major ethnic groups of the country such as the Oromo and Amhara have been staging massive protests that began in the year 2013/2014. After killing thousands of people and jailing tens of thousands, the government declared in October 2016 a state of emergency. The ruling minority oligarchy still continues to deliberately fabricate ethnic tensions and wage proxy wars against the major ethnic groups of the country such as the Oromo and Somali to cow them into submission.

The on-going large scale ethnic tension and conflicts in Somali, Oromia and Amahara regions of the country are major prelude to the balkanization of Ethiopia. The TPLFƯs barbaric plan to disarm one ethnic group while arming to teeth the invading other minority ethnic group is a major genocidal policy. Plotting this kind of evil policy and using proxy militias to wage covert wars against one ethnic group should be stopped
before it lead the country to Syrian and Yugoslavian like quagmire that we cannot extricate from.
Therefore, the federal system in Ethiopia, based on ethnicity, has been a failure and more of a curse. The main arguments which witness the fact that ethnic federalism in Ethiopia is a failed drama (a curse) includes: federalism has kept the poor in poverty, denied Ethiopians liberty, rights and good governance and has planted mistrust between ethnic groups. Moreover, these circumstances stopped the different ethnic groups from organizing themselves and pose any challenge to the ruling party.
ƮƯGuns make losers feel like winners. ThatƯs why people who suck at life donƯt want to give up their guns.ƯƯ (Oliver M. Malloy